Setting Up a Wargames Campaign

I came only recently to Tony Bath. I’d heard vague stories about a game in the misty past set in Conan’s world. Details were murky and scarce. It wasn’t clear if it was D&D or something else, and I couldn’t sort out how the game related to the archetypal barbarian.

In early 2011, while browsing the Hill Cantons, I discovered a four-part series about Bath’s Hyboria wargames campaign (December 2010). Author Chris Kutalik had got hold of a copy of Setting Up a Wargames Campaign by the legendary English wargamer. Kutalik doesn’t so much review the book as proselytize. That day I became an acolyte.

Today, we take for granted the campaign. For modern role-playing gamers, a single adventure is called a “one-shot,” and while the form has its merits, it lacks the scope, continuity, and satisfaction a campaign provides.

The Society of Ancients

Tony Bath founded the Society of Ancients and its journal Slingshot in 1965. Now in its 56th year, the society continues to thrive. It has an active members-only online forum, hosts an annual Battle Day, and still produces Slingshot bi-monthly in full color.

So it was, too, with wargamers in the 1960s. Pushing lead figures across a tabletop gets stale after a number of unrelated battles. The context, coming from historical accounts, is inflexible. The setup and tactics, again historical, are sometimes limited. Battles often ended in a slug-fest, there being no reason a general might conserve troops for the morrow.

Veering from the strictly historical wargame, campaigners step back from the table and consider the larger theater of operations. On large-scale maps showing rivers instead of streams, mountains instead of hilltops, countries instead of towns, opposing generals exercise strategy instead of tactics. They march armies, represented by pins, across the map, each general in secret from the other, until forces meet.

In the ensuing battle, the context, setup, and tactics are all determined by the preceding events and the terrain upon which the two forces find each other. Troops must be used effectively or be withdrawn to fight another day. This is the stuff of the campaign.

In those years, Tony Bath devised the quintessential wargames campaign. But he went further, for he set the campaign in a fictitious world. He lifted the map from the end papers of a Robert Howard novel. He cribbed also the setting’s name, and so Hyboria came again to life in the second half of the twentieth century. Bath borrowed real-world cultures, both ancient and medieval, to populate the continent with peoples, whence armies were drawn. 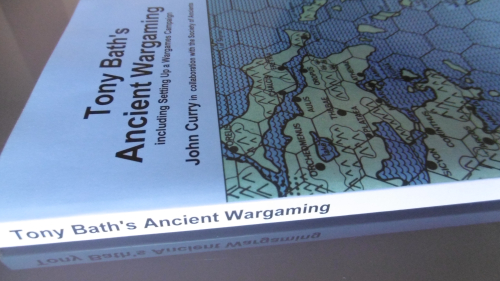 That was only the beginning. Bath describes the process and much more in amicable prose. Setting Up a Wargames Campaign was published in 1973 by Wargames Research Group. It had a second edition (1977) and a revised third edition in 1986. Copies now circulate on various reseller sites for not extraordinary prices. At the time, though, I couldn’t find any such copy.

Instead, I found a reproduction. As part of his History of Wargaming Project, John Curry, with the Society of Ancients, published Tony Bath’s Ancient Wargaming (2009, 2011), which is a reprint collection of three previously published books:

In setting up the Valormr Campaign, I’m using Wargames Campaign’s first three chapters, in which Bath describes the basics:

I’m sure to make use of later chapters in subsequent campaigns. Furthermore, the ancient wargame rules Peltast and Pila will serve in campaigns taking place earlier in the DONJON LANDS time line.